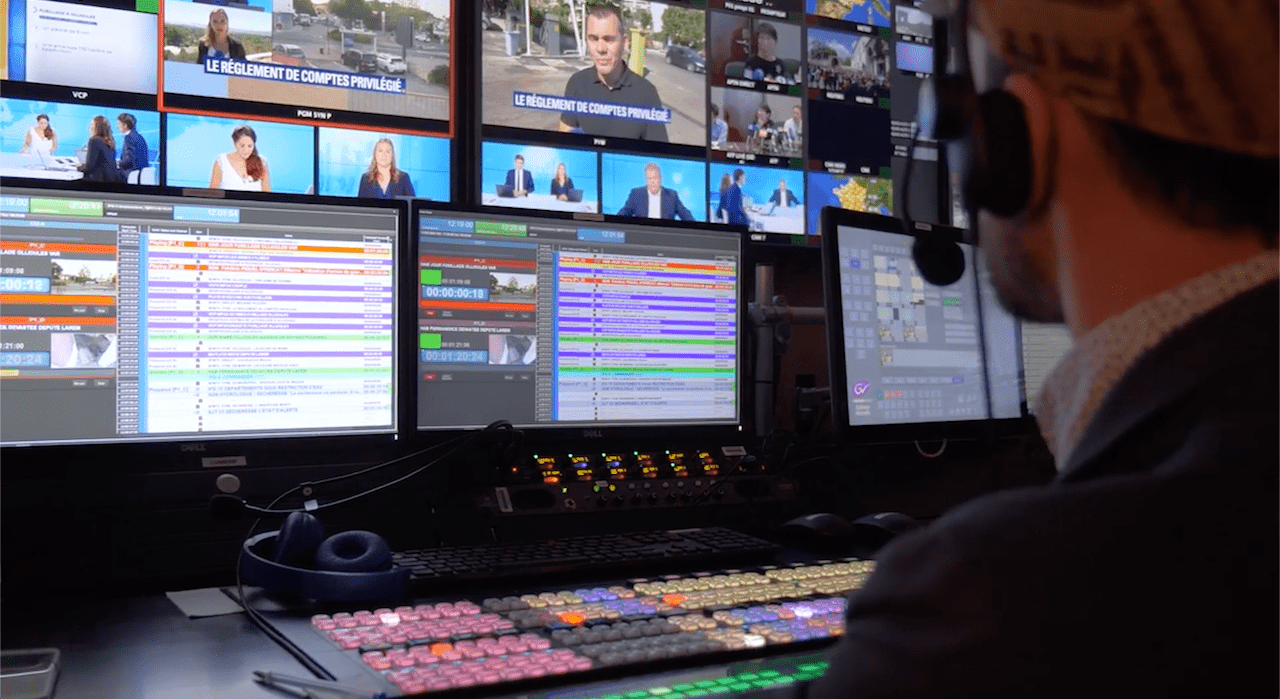 Doing more for less! How Dalet OnePlay brings live production to the next level

It’s probably safe to say that there’s never been so much pressure for rapid change in the broadcasting industry. The demands for increasing production value with fewer resources is creating mounting pressure. Without a doubt, the year 2020 will be remembered for the need to quickly develop new production methods, new workflows, and new economies. Flexibility and adaptability have become even more “normal”.

Just as viewers’ expectations have grown for high resolution video and high quality audio, they also have become accustomed to extremely sophisticated live studio productions. Viewers may not notice the individual visual elements that go into a slick news production, but what started out as a man or a woman behind a desk, statically reading a script to a camera, is now a multifaceted ballet of lights, camera moves and full-video graphical elements in the background and sometimes the foreground.

News broadcasts have always been a multi-headed operation; a balance between editorial and production. Editorial has a different view on the task than those working on the production floor. A newsroom’s output is a list of stories, in the form of a schedule or running order. The last two decades have seen a steady growth in automated newsroom systems that have all the necessary attributes around flexibility and immediacy. Production’s output is what the viewers actually see and hear.

Dalet OnePlay is an add-on to the Dalet Galaxy five media asset management, workflow orchestration and editorial platform. It’s designed to add a crucial additional layer of control to a live production schedule. This new portfolio of capabilities goes way beyond simple news production and into all kinds of live-to-air and live for reuse shows. The intention is to bring sophisticated, precision control and automation to smaller live production facilities. It means that richer productions can be made with fewer manual resources, and while human input is needed to set up templates, once they’re made, they’re reusable forever.

We’ll have a look at a real-world example of Dalet OnePlay in a minute, but first, let’s dive into the capabilities of the software.

What Dalet OnePlay brings is the ability to generate live material with the lush “look and feel” of a big, sophisticated broadcaster, with less effort and manual input. Dalet OnePlay can control almost every aspect of a TV studio from a set of instructions – essentially a template – that’s built for each type of segment.

A production that might have called for seven production staff can be made with two or three, with no visual difference to viewers.

Typically, each segment of a live show will have the same requirements from day to day. An anchor’s opening monologue might involve an initial camera move – maybe from wide angle to a close-up. There may be an audio sting, with synchronised graphics. The lighting might change to make a more intimate connection with the presenter. The background graphics will change. Lower thirds will give the name of the presenter. A microphone channel will open on an audio mixer.

It doesn’t matter how complicated the set-up or the running order: it’s all encapsulated in a template that’s re-usable as often as needed. A little more effort up front in setting up Dalet OnePlay automation templates is repaid many times over as they can be used over and over.

Because Dalet OnePlay is an add-on to Dalet Galaxy five, it is fairly straight-forward to deploy. An existing Galaxy five customer collaborated with Dalet in a proof-of-concept trial of Dalet OnePlay.

The idea was the show could be freed-up for other urgent production tasks while those elements of the day’s production roster that were repetitive could be run under automation. There was no visible difference to the viewers. There were other benefits too: the control room was less noisy. There was no-one shouting “give me camera A. Throw me graphics on the left”.

A really important part of the design ethos for Dalet OnePlay is that the new automation capabilities shouldn’t interfere with the editorial process. That’s because the elements being automated are on the studio floor. They include camera moves, lighting, audio (stings and jingles etc) as well as introductory or interstitial video sequences and end titles. Almost every aspect of live studio production can be included, and Dalet can either call on its existing library of “wrappers” for third party devices, or write new ones where necessary. (For developers reading this – it uses microservices and RESTful APIs). All of this is transparent to the editorial process. To production, the automation is visible on the schedule’s timeline as moving automated objects.

Dalet OnePlay is scalable and flexible. It can apply to almost any live production situation whether it’s news, sports or more general show control.

One ideal application is the one-person weather update, the kind you’ll often see lasting about a minute and inserted into your morning news.

Traditionally this would be the presenter and then three or four other people running the lights, the graphics and everything else. In a further proof of concept, Dalet OnePlay was set up so that the weather presenter controlled everything. There was literally no need for any other production personnel to be on site. Resources were then freed up to work on other productions..

All that’s needed for this, or far more complicated set-ups, is for some work up-front to create the template. Everything else is the same. There’s access to the same media, the same graphics and all the same resource. Dalet OnePlay automates camera moves, audio levels, library playback, and lighting. Once the template is made, it can be reused indefinitely. Existing templates can be modified for ongoing changes.

Dalet Galaxy five users are particularly interested in the system when they realize that they could put Dalet OnePlay to work on all the short segments in their daily schedule “wheel”, without needing large numbers of control room staff. It’s a big saving for them both in terms of cost and efficiency. And, an additional benefit of Dalet OnePlay is that it reduces the amount of physical presence needed in a control room.

There are other benefits, too. Dalet OnePlay is browser based, so it can be run from any computer, including tablets, with suitable authorization. Not only does that mean that schedules and control templates can be generated and updated remotely, but when big and unexpected news breaks, it’s possible to remotely “boot up” a cold studio so that it’s ready for the presenters, with everything in place, including lighting, camera moves and graphics. This reduces the number of personnel needed at the studio site on standby, and it increases the ability to function normally under conditions of social distancing.

Dalet OnePlay fits naturally into the Dalet Galaxy five ecosystem. So it starts from a position of strength, with frictionless access to all of the resources – news media, media, graphics, archives – under Dalet Galaxy five’s control. Layered on top of this is an object-based automation system that becomes part of the scheduling process. From an editorial or content-planning perspective, nothing has changed.

From a production and resources view, sophisticated live productions become massively automated, freeing up personnel to work on other production priorities, and lowering the overall costs for broadcasters while allowing them to maintain or even increase their production standards.